Years ago when I first started using clicker training it was with the mindset that I wanted to “fix” my horse.

He had had a horrible existence in his early life as evidenced by some of his dramatic escape behaviour when ridden and on the ground. He would buck sky high at the drop of a hat.

It was a learned behaviour he had likely acquired in some fairly major one-time-learning event and it was his behaviour of choice in any situation in which he was either being put under pressure to do something he did not want to do, or prevented from doing something he felt was very necessary or preferable to what the rider wanted.

I had one lesson years and years ago and very early on our relationship in which in an effort to get more impulsion from my “lazy” horse, my instructor had me “tap” him with a schooling whip, in the usual position behind my lower leg.

He bucked each time I applied the whip, and then started to buck before I could apply it, so my Advanced Instructor informed me of the need to keep whipping him until he stopped bucking and went forwards instead.

That was the beginning of the end of my respect for the methods of those in the mainstream equestrian establishment.

I enlisted the help of numerous more experienced friends to ride Archie in an effort to find a solution. We used to have parties at home on his gotcha day (which is incidentally Halloween and for a good long while it did seem that we had the horse from hell) and I would ask all my friends to form a circle. I would ask those who had ridden him to take a step forward into the centre.

And then I would ask those who had been bucked off or who had otherwise fallen off to take a step back to rejoin the circle. There was only one person standing in the centre and that was my lovely and loyal friend Anne P who gave us an incredible amount of patient and good humoured help over the years. I think without her help we would have had more disasters than we did. She was the only one who managed to ride him in a way that entitled her to the great honour of being allowed to stay in the saddle.

During that time I dabbled with clicker training for a while but no one I read or asked seem to have any clue about how to keep him from bucking.

I used clicker training as what I called an accelerator for a long time – I’d use some aversive stimulus (pressure) to try to get some behaviour and then click for it, but it never really produced any great increase in performance, enthusiasm or attitude. And it didn’t stop the bucking.

I progressed to following many of the different strains of so called natural horsemanship and I finally began to understand some of what my BHS instructor had been trying to convey.

I got really good at using punishment (corrections) to deter unwanted behaviour and intercepting or avoiding doing things that might get us into a bucking situation.

And at the same time I kept using clicker training alongside the punishment and negative reinforcement as a “tool” to try to get more of what I wanted.

What I realised after many many years of intense study of and major expenditure on learning about so many different methods (all of which boiled down to the same thing) was that what really matters is not what tools you use, but how your horse perceives you overall.

I was “using” clicker training and I was “using” natural horsemanship and I was “using” various bits of equipment and tools and techniques and principles because in the end it came down to the fact that I had the “user” mindset and that I was so frustrated because I couldn’t use my horse the way I wanted.

I was using my horse as a vehicle for my entertainment and enjoyment. And the only reason I was putting effort into all that learning was because I was missing out on what I wanted and had dreamed of when I brought him home to live with us in 2001.

For as long as what the horse wants to do is even 1 percent less important than what we want then we tend to see training methods as tools.

We want to manoeuvre his body around either with us on the ground or on his back, we want him to comply with our requests to go from a to b without any resistance. We want him to show no reaction to any of what we consider to be irrelevant stimuli, because his inattention to our commands detracts from what we want or it makes us nervous or afraid or frustrated.

We want him to listen to us and do what we ask immediately without hesitation or question. We look at horses who behave like that for their riders and we say “Oh isn’t he a good horse” when the reality is that he is often a disenchanted and helpless automaton. We applaud and reward the skills used to produce a compliant ridden horse with gold medals at the Olympics. That level of control of the horse is regarded as the pinnacle of achievement.

Those of us in the horse operator mindset say we want a relationship with the horse but the reality is that we only appreciate him when he is doing what we want and we are very ready to correct him when he steps out of line.

That is not a partnership or a friendship. I can’t even think of a word for it but a horse in that situation is really little more than a slave.

If we want that kind of relationship with a ridden being, we would all be much better off and happier with a motorbike (although I’ve been bucked off one of those as well – but that is another story). 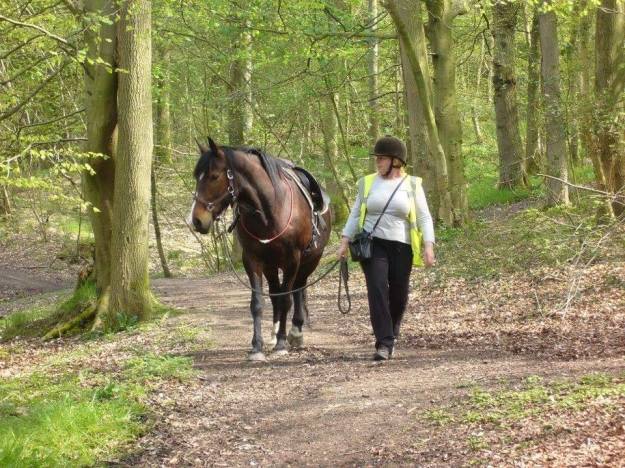 What we need to ask ourselves really is whether we see clicker training as a tool or whether we want to be positive reinforcers to our horse.

When we aim to be positive reinforcers for our horses then we go beyond operant conditioning as a tool to get more of what we want and we begin to see that we are a conditioned stimulus to our horse.

What that means is that horses learn and make decisions about how they perceive us whenever we are present, based on how we move, what we do or say, how we react or respond to them as fellow beings, the choices we make about our own actions and behaviour and the things to which we expose our horses. These all have meaning to the horse and they associate all of that with, and form their opinion of us and what we represent, accordingly.

Horses have opinions and form perceptions of us that are based on all of those things about how we behave.

We can’t use clicker training one minute and then be correcting the horse for unwanted behaviour the next, or using some kind of aversive control in one context and then giving the horse a treat or scratch in another and expect to have ourselves be positively regarded by our animals.

If we really want it to be about the relationship, then we go beyond using tools or techniques or methods and we ask ourselves how we can go about enabling the horse to express his opinions and to make genuine choices and how we can stop associating ourselves with unpleasantness, coercion, force, pressure, correction or compulsion.

Being a positive reinforcer is much more about an entire way of being – a lifestyle – and not about the choice of tool or method of reinforcement, of which there are only two.

If you’re not putting all your effort into avoiding the use of aversive stimuli to deter or to produce and reinforce behaviour, then you might be using clicker training as a tool but you aren’t yet in the positive reinforcement mindset.

For me, for my team and for the people we like to help with their horses this is about making dramatic and profound changes to the co-existence and relationships of people and horses and about challenging the attitudes that people have towards horses and ponies.

It’s not about using clicker training as a tool or an accelerator or as a means to an end or to get the horse to behave himself or to do some kind of entertaining trick or to improve his “performance” as a vehicle.

It’s about forming relationships with animals that involve busting a gut to associate ourselves with good things.

We don’t “use” clicker training. Our aim is to be perceived by our animals as positive reinforcers.

Adopt that mindset, and this will change everything about the relationship you will have with your pony, donkey, mule or horse.

In fact it is the only thing that will change the attitude and behaviour of your animals.

Because in the end the only attitude and behaviour you can really change is your own.

1 thought on “Do you use clicker training? Or do you want to be a positive reinforcer?”